And the first quarter results, for posterity:
( Collapse )

King Lear is probably one of my favourite Shakespeare plays -- it's certainly one that I know particularly well. So when I heard that the NAC was putting on an all-aboriginal production of it, of course I had to go.

It's a very interesting production. The staging is great -- the set design, the sound design, it all works really well. The transposition of the story to an Aboriginal Canada works pretty well, too, although you have to ignore quite a few place names to make it work (well, given how many Canadian places have ended up being named after European places, I suppose you could have a cliff of Dover...).

Unfortunately, the acting was a bit uneven. In some cases, I think it showed that these actors hadn't done a lot of Shakespeare. There was a bit too much reciting at places, breaking phrases at line breaks rather than naturally, and a few lines were flubbed or tripped over.

That said, some of the cast were truly great. I loved all three of the women, although Regan was probably my favourite -- she was magnificently sneaky. And Goneril pulled off that supreme confidence and arrogance brilliantly. The Fool was great, too -- really entertaining. Her Cordelia was perhaps a little bland in contrast, but then, Cordelia's always pretty bland, and she did actually have a bit of a spark in this production.

I was a fan of Edmund, too -- I love the role, and I was about to say that it's a hard role to play badly, but I do think it could be disastrous if an actor doesn't have the necessary charisma. That was not a problem here.

Kent was a little on the shaky side (not so much in his performance as in his delivery of the language), and the actor playing Edward was much more memorable as Poor Tom than as the rather forgettable Edward (Although again, Edward's pretty much a nonentity for the first half of the play, so that's not the actor's fault at all).

And unfortunately, August Schellenberg's Lear was uneven as well. There were times when he was great -- the mad scenes were well done, and the Cordelia death scene was really quite excellent. But the storm speech felt weak and rushed (which was really too bad, because with the staging and lighting it could have been brilliant), and he generally came across as more pathetic than tragic. That's a legitimate interpretation, I suppose, but I really do prefer a stronger Lear, at least initially, to make his deterioration more emotionally affecting.

All in all, it's a good production, and well worth seeing, although it doesn't quite reach the level to which it aspires.

It made the day feel like summer. And like vacation (never mind that I was biking in to work!). Of course, the sun and the warmth didn't hurt either. 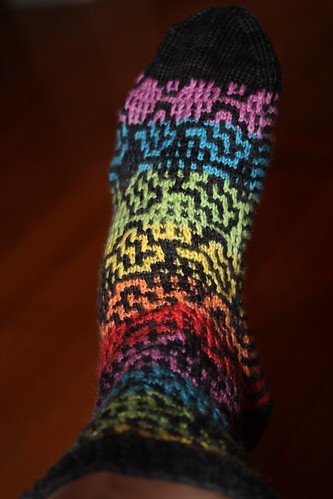 Here's the promised picture of the rainbow sock. There are a few more over on Flickr.

But now I have completed the first sock, and I have to decide -- do I try to make the second sock match exactly, lining up the colours so that they start with the same colour (yellow) and change in (approximately) the same places? Or is that a recipe for making me squirrelly?

But if I just start with the next colour (which is tempting), will it bother me later that the socks don't match exactly? Or will that be more fun?

(Yes, I know this would be more interesting with a sock picture. I will try to add one tonight.)

Theoretically, I am otherstuff blogging as well. Or I will. Or I might.

Anyway. I have been keeping a running series of mini-reviews of my reading for this year, and I keep getting almost caught up enough to post said reviews, and then falling behind again. So that's why it's a quarter of the way through the year, and I am posting my books for the first time. Not that any of you are waiting with bated breath for my book reviews!

Anyway! Onwards! Here it is, the much-anticipated List of My Reading in 2012!

90. A Shadow in Summer (Daniel Abraham)
It is a testament to how much I enjoyed this book that I immediately put the remaining three books in the series on hold at the library. The characters are sympathetic, the world-building is convincing, and the magic system is distinctly different from anything I'm used to seeing in fantasy. There are no real heroes, and no real villains -- just people with different agendas doing their best in imperfect circumstances. And even when that means doing really horrible things, it's hard to hate them. *****

91. Haunted: Tales of the Grotesque (Joyce Carol Oates)
As with all short story collections, some of these were better than others. They're all unsettling, though, dealing with dark places in the human psyche. The stories aren't speculative, but they're all more or less ghost stories -- except that the ghost is always (probably) something repressed in the characters themselves (usually something sexual). ***

92. The Kingdom of Gods (N.K. Jemisin)
The conclusion of Jemisin's Inheritance trilogy deals further with the implications of the major upheval that happened in the first book, but primarily it deals with the nature of Gods and Godlings. It occurs to me that it's actually fairly unusual for fantasy to deal directly with gods these days -- even in worlds where the gods are shown to be real, and really acting on human lives, we almost never have any glimpse of the gods' perspectives or motivations. But Jemisin has written an entire trilogy that, for all of the impact its events have on the human world, is mostly about the gods' interactions and dealings. ****

93. Desolation Island (Patrick O'Brian)
Oh, wow. This one was really good. I have enjoyed and been caught up in the previous volumes, mostly because there's something really appealing about O'Brian's voice, but this one... wow. The action scenes are incredibly compelling, and I definitely didn't want it to end. And now I have to wait for the next one. Sigh. *****

94. Shadowmarch (Tad Williams)
There's something a bit off about the pacing of this book -- specifically, it feels really slow. It's entirely possible to have a Big Fat Fantasy novel that moves quickly, but this one seems to spend pages and pages dealing with characters' angst while they debate what to do without ever actually doing any of it. There's a lot going on, but much more time is spent stuck in characters' heads with their self-doubt. And Barrick's head is a really unpleasant place to be, since I've outgrown most of my own teenage angst. The other viewpoint characters -- Briony and Chert, mostly -- are more appealing, but they still spend a silly amount of time agonizing about everything. I think this book is probably mostly meant to be slow build, but I do hope the next volume moves a little bit more quickly. **

I kind of love New Year's Eve. I know that the turning of the year doesn't actually change anything (except that it makes it very important to concentrate when writing cheques for a few weeks/months), but it still feels like something special. I love that it's an excuse/motivation to go out and celebrate when everyone else is celebrating too. I love having a reason to wear sparkly nail polish and body glitter and other absurd things that I am theoretically far too old for. I love the countdowns, and the inevitable technical glitches that make the actual New Year a little imprecise. I even love the terrible cheap "champagne" they usually serve in bars on New Year's Eve, and the large crowd of drunken people singing Auld Lang Syne who don't actually know the words, and who clearly don't sing in public very often.

This may seem contradictory with yesterday's whinge about being over-peopled, but a dance bar is actually a pretty good place for an introvert -- the loud music makes it nearly impossible to have conversations with strangers beyond "excuse me, you're stepping on my toe". And since I am finally mostly over the whole "nobody will ever want me why don't I get hit on by creepy strangers in bars" angst of my earlier years, I can actually relax and just dance, which is a wonderfully fun thing to do, even if it does make one awfully sweaty.

So yeah. New Year's Eve. We're going dancing. It's going to be fun.

And then tomorrow I'll take a look at 2012, and take a deep breath, and start another turn around the sun.

I hope whatever you're doing to mark this entirely arbitrary demarcation of time, that it's what you want to be doing, and that you can look back on 2011 and forward to 2012 with peace and joy and optimism. Because this is, more than anything else, the festival of optimism.

Now I must go and find more ways to apply glitter.

This is a tough time of year for an introvert. There are so many parties, so many events, and you really do have to go to all of them. Not only because you're expected to, but because you genuinely want to see all these people. You love/like them, don't see them enough, want to spend time with them... and yet spending time with them tends to leave you (okay, me. This is all about me, and the second person is getting silly.) drained and tired and grouchy.

I don't want to be grouchy about holidays and holiday parties. I just... want them to be more spaced out. And not occurring when I've also stressed myself out fretting about perfect gifts and decorations and all the other ridiculous trappings that I am utterly compelled to fret about at this time of year.

And it's weird, because I really do love the holidays. I love the parties, I love giving presents, I love the decorations, and especially the lights. But they leave me so very tired.

It's pretty much impossible to explain this to an extrovert. They can understand in theory ("you know how you get punchy if you spend too much time alone, if you don't get to interact with other people? I get punchy if I don't spend a fair bit of time alone."), but they have a hard time really grokking how I can be simultaneously sick of people and eager to see people, or simultaneously tired and grouchy and festive and cheerful. I don't entirely understand it myself, to be honest. I just know that one part of me wants nothing more than holiday cheer, and another part of me wants desperately to curl up in a corner with a book or a video game and not talk to anyone for a while.

Bah humbug. And also happy Winter Season. All at the same time.

Moving tends to turn one's brain inside out. So I'm going to use that as my excuse for my failure to post this list before now. It's been almost ready to go for a while, but I do insist on continuing to read, which necessitates further additions to the list, and it becomes sort of a never-ending vicious circle.